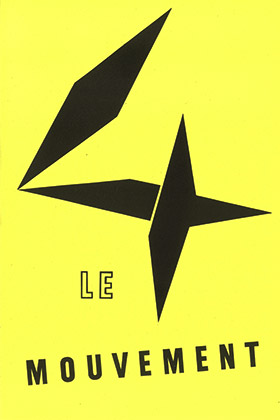 Le Manifeste Jaune (The Yellow Manifesto) is the nickname given to the manifesto written by Vasarely, as well as Pontus Hulten and Roger Bordier, published for the exhibition "Le Movement" at the Galerie Denise René in 1955. The manifesto and the exhibition marked the official start of the Kinetic Movement. Agam, Bury, Calder, Duchamp, Jacobsen, Soto Tinguely and Vasarely gathered for the historic exhibition mingling new talents with old. Vasarely inevitably became the leader of the Kinetic Movement. The manifesto, titled ‘The Movement: notes for a manifesto”, rapidly became known as the "Yellow Manifesto" because of its colour.

In the “yellow manifesto”, Vasarely announced its “unités plastiques” which would subsequently be used for many of his works. “Form can exist only if called attention to by some color quality, and color is a quality only when defined by form”. He also proclaims the advent of the Multiple, and the end of easel painting “The myth of the single piece … must give way to the conception of a possibility of RE-CREATION, MULTIPLICATION AND EXPANSION.”